This weekend several widows who I’ve had contact with over the last several weeks traveled to NYC for a get together. Over the last week I’ve slowly been meeting other widows, but this weekend was the first time I met with people who were closer in age to me. However, there was still some significant age differences, but there was a handful of widows who were in their early 30’s. Which was nice for me, because it often gets difficult to relate to the W’s who had a lifetime of companionship with their spouse when I only had half a decade. At the end of the day though, we all lost someone central to our lives regardless of longevity.

Many of the W’s started meeting each other between the 6-12 month mark of widowhood. I’m less than 3 months out. When people asked how long out I was, I told them less than 3 months and they were really surprised I was there. Much was based on their own grief experience and where they were at that point during the grieving process. I often times just shrug it off. I’m ready to meet other people who can relate to my situation and I feel it will help me move on. Going to this get together so early on in the process was commended as admirable and brave. I’m not sure if it’s because I’m slightly jaded but I don’t think much of it. I just go. I was looking forward to attending it and my excitement for the event prevailed any trepidation that arose in the days prior to.

I love George more than anything, and tonight I cried a lot because I just missed him so much. I miss his laugh, his face, how sweet his kisses were. How spectacular his hugs felt, how he made me laugh, his amazing offbeat sense of humor. I miss having him love me. But with this grieving process, it can eat you alive. If you allow your mind to wander too much, grief can swallow you whole. Every single day with grief, you have to make a decision on how to approach it; Kill or be killed, eat or be eaten? 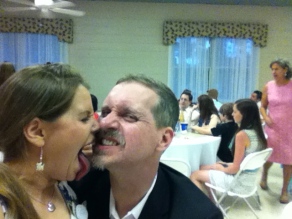 Fitness professional, fitness & nutrition writer, widowed at 28. Writing about getting through grief through self-care, physical activity, and the ​constant feeling of being uncomfortable.
View all posts by J. →
This entry was posted in Uncategorized and tagged call of the wild, Experiences, friends, grief, jack london, literary, lonely, sad, strength, widow, young widow. Bookmark the permalink.